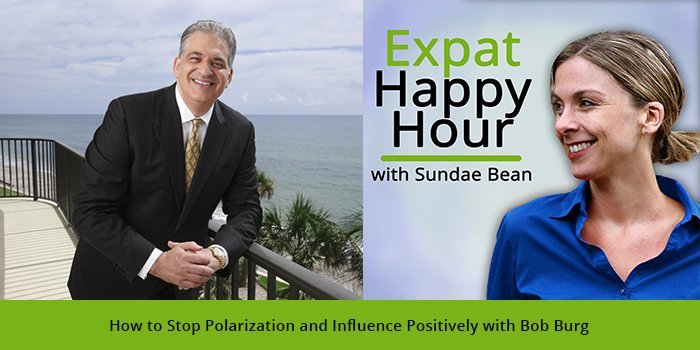 “Today’s discussions are no longer discussions but rather fueled up, hate-filled, vitriol-spilling diatribes and personal insults. The result? No minds are being changed but rather they remain stuck in the “echo chambers” of their already closely-held beliefs. Worse, friends are becoming enemies, discourse has shut down, understanding and acceptance is not being reached, and people feel downright lousy about it. Is this any way to communicate? Is this any way to live?” – Bob Burg

No, it certainly isn’t.

These are the words of Bob Burg, this week’s special guest expert on Expat Happy Hour. Bob Burg is the co-author of the best-selling book, The Go-Giver, and he joins me today to talk about

It is time to stop speaking in an echo-chamber and put an end to Facebook fights.

Don’t miss episode 91: How to Stop Polarization and Influence Positively with Bob Burg

Here’s to dialogue, not entrenched debates